The City of Blood by Frédérique Molay
My rating: 5 of 5 stars

I cannot get enough of this series. I received an Advanced copy via NetGalley (I love them!). Whereas the first two novels left me wanting to feel more like I was really in Paris, this one gave me more of that feel. The author has definitely grown with each book. Although the book describes places I did not see while there I did not miss a beat as I could see it this time. The description of the park and its history was vivid. I could see the banquet table and the different parts of the park. I could see the things that were described in the history of the park. I could envision the actual banquet with people at the table and how things were laid out and how things occurred at the archaeological dig. As the investigation into the remains found I was on edge trying to guest who put it there. Was it someone at the banquet or someone new? How long had the remains been there given how long the banquet leftovers had been buried?

I love Nico Sirsky and it is a great experience getting to learn about his family's background and how they related to others from the Ukraine and their religious history. Although I wish we were privy to Nico's family's visit to the Ukraine after so many years of his mother being away, I loved getting more of a glimpse into his mother's life. She said something at lunch that I wondered if it was due to her history and if there will be more about that in a future story or if it was due to what was occurring in The City of Blood. Nico's elite team sounds great and I love reading about each of them doing their part of the investigations. I would like the books to be longer and give more character development and make the books longer. This is a great series set in a beautiful city and I cannot wait to see where it goes next!

The Making of a Hero 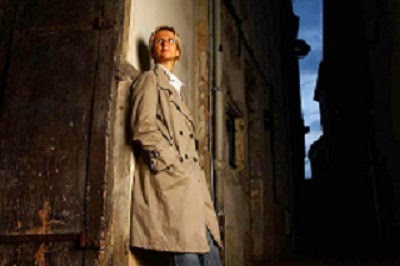 Frédérique Molay is an award-winner author of a series of police procedurals set in Paris and a master of suspense and detail. Her novels transport readers to the French capital, taking them behind the scenes with the city’s elite detectives. The 7th Woman is an international bestseller available in English from Le French Book. The second Paris Homicide mystery, Crossing the Line, came out in September 2014, and the third, The City of Blood, hits the bookstores on January 20, 2014. Here she shares some of the inspiration behind her central character, Chief of Police Nico Sirsky. I adored my paternal grandmother. She never spoke much about her Ukrainian background, but when she did, her stories were either filled with suffering—her own and that of a whole population—or marvelous and incredible. Her family lived in Odessa during the Russian Empire, and one of my ancestors was a captain in the czar’s imperial guard. One mission involved standing in for the czar as a look-alike. The family fled in 1902, immigrating to France. One of my grandmother’s uncles began working as a Russian dancer in a Parisian nightclub, before driving a taxi, then working as a furrier, and finally moving to the United States to make a fortune in industrial dry cleaning in Hollywood. What a story! There is a bit of my grandmother in Anya, Nico’s mother. I miss her, which is probably why I created Anya. They have the same deep blue eyes and picturesque Slavic personality. By choosing a hero with Ukrainian origins, I am in a way able to connect with my own family background. In The City of Blood, for example, readers discover the Russian Paris, which was an emotionally charged experience for me as a writer. Add to that my uncertain attraction to superheroes, whom I’m always hoping to meet one day in the streets. Chief Nico Sirsky is one of them, in his own way. He is a resolutely positive hero, even as he faces the ups and downs of everyday modern life and human cruelty. Link to City of Blood's website
at January 16, 2015 No comments:

Revolution by W.L. Goodwater My rating: 5 of 5 stars Revolution is the 2nd installment in the Cold War Magic series. It is a new installm...