Christmas at the Castle by Melissa McClone
My rating: 4 of 5 stars

Christmas at the Castle was a great read. I received a copy from NetGalley in exchange for an honest review. A person is really blessed if they have at least one life-long friend. Kat and Sophie met at Summer camp and developed a friendship that most would envy, however, Sophie's brother was there and seemed to take an immense disliking to Kat which appears to exist 15 years later. Kat is a veterinarian and loves her job and despite having a ton of student loans she is pretty happy. Sophie, it turns out is a princess and her brother Gill is a Prince and Sophie is getting married. Although she visited Kat over the years and met Kat's family, Kat has never met Sophie's family and it also turns out that they think Kat has had too much influence over Sophie and do not care for Kat.

When Kat arrives at the small country where Sophie's family is the monarch, her mother the queen, she has a pretty chilly reception from two of the family members. Kat is a pretty strong character and for the most part it rolls right off of her, however, Gill starts to think something is different about Kat and wonders if he had her wrong all along. Christmas at the Castle does a great job of allowing Gill and Kat to both to slowly learn more about each other and they become friends and more. The reader is treated to the slow build-up of a clean romance and if you like modern royal romances this book fits in very nicely.
at December 21, 2016 No comments:

Book Description
Miranda MacDonnell is on the run. When she inherited a mysterious relic from her mother, she had no idea the dangers it would bring. Now hunted by a relentless foe who will stop at nothing to find her, she has one choice: stow away on the ship of the notorious privateer, Black Hawk.

Rob Hawkins, the half-English privateer known as Black Hawk, has a mission from the Tudor king to find and kill the rogue commander, Sir Ralph Evers. To complete his quest, Hawk must find Miranda, a young woman Evers is pursuing. Caught in a tempest, he is shipwrecked with a "boy" who demonstrates an uncanny ability for saving him. Cast away on the mysterious Isle of the Dead, Hawk realizes that the "boy" traveling with him is actually Miranda MacDonnell and having her means that Evers will come to him. What begins as a ploy —using her as bait—soon changes, however, as he falls in love with her.

Ancient forces are at work, drawing the four possessors of the relic’s power to the Isle of the Dead in the Outer Hebrides for a final battle where good must overcome the forces of evil in this spectacular finale to the Scottish Relic Trilogy.

Authors Nikoo and Jim McGoldrick (writing as May McGoldrick) weave emotionally satisfying tales of love and danger. Publishing under the names of May McGoldrick and Jan Coffey, these authors have written thirty-five novels and works of nonfiction for Penguin Putnam, Mira, HarperCollins, Entangled, and Heinemann. Nikoo, an engineer, also conducts frequent workshops on writing and publishing and serves as a Resident Author. Jim holds a Ph.D. in Medieval and Renaissance literature and teaches English in northwestern Connecticut.

Tempest in the Highlands by May McGoldrick
My rating: 4 of 5 stars

Tempest in the Highlands is a great book that I received a free copy of from St. Martin's via NetGalley in exchange for an honest review. I have never been a pirate story reader. This actually might be my first. Technically, Hawk is not a pirate, but, to the eyes of those in the world he appears to be a pirate, but, he is so much more. He reads like a tough, great-looking, ethical man who secretly works for the King of England, who is up to his neck in fighting wars on all fronts. One of his commanders has gone rogue and the King has sent Hawk to bring him down, permanently. Hawk is following Evers' trail and lands in Scotland where Evers has just left a village in death and destruction, including killing the laird of the village. He is searching for the daughter of the laird, Miranda, who is missing.

Miranda has managed to stay a couple of steps ahead of Evers, however, Evers has a skill that is leading him right to Miranda who has managed to escape by stowing away on Hawk's ship disguised as a boy. Hawk is following the one person who is a lot closer than he thought. The weather changes and after the ship is damaged Hawk and Miranda are castaways on a deserted island. Evers is closing in and now has the one thing that Miranda wants more than anything and he will force her to choose. It turns out that there is more to the island they have landed on and more than Evers will be present since something has drawn everyone to the island. My favorite part of this story were the conversations between Miranda and Hawk when she was not aware he had determined she was not a boy. Miranda comes up with some hilarious answers to questions she couldn't possibly know the answer to since she is really not a boy. The story was written with rich characters and a great plot. I was not aware of the first two books and I was glad to see that I could jump right in and still understand everything without having read the first two books. I do plan to go back and take a look at those because this is a great story.

A Promise Made by Anissa Garcia
My rating: 4 of 5 stars

Some stories just make the reader feel good. A Promise Made is one of those stories. I received a copy from Barclay Publishing in exchange for an honest review. A Promise Made is the second in the story of three friends, Josh, Evan and Zach who each have promises that they have to live up to when they meet the one. Josh has wanted Marla from the moment he met her. She and Grace (A Promise Kept) are best friends and Grace is well aware that Josh is interested in Marla who won't give him the time of day. Not only will she not give him the time of day. She acts as if she seriously dislikes him. The harder he tries, the meaner she seems to get. Marla is having trouble at work. She has worked hard to get a raise so she can afford to take the vacation she has dreamed of and saved for soon. However, the owner's son is now working at the firm and he is showing a lot of interest in Marla, very unwanted interest. It is not long until his interest turns hostile when Marla turns him down.

Josh is a well-accomplished personal trainer who trains several Hollywood actors, one of which is his friend Evan. He is in Austin because Evan is there temporarily until he goes to his next site for filming. Since Josh is Evan's dedicated personal trainer he travels with him on location. Grace is worried about her pal Marla after she is mugged in the parking garage where she parks during work hours. Grace asks Josh to look out for and train Marla in self-defense after the mugging. This is Josh's chance to spend time with Marla and hopefully, work up to convincing Marla to go out with him. Marla's problems get worse when her home and car are vandalized. Josh wants to protect her and he has a promise that he made to Grace that he has to keep. Things take a turn and both Marla and Josh have to determine how long they both plan to let the past affect their future. It is a great story with a great ending.
at December 06, 2016 No comments:

Email ThisBlogThis!Share to TwitterShare to FacebookShare to Pinterest
A PROMISE MADE
by Anissa Garcia

A feisty redhead and an alpha male makes for a steamy pairing you can't resist. Fans of The Matchmaker's Playbook by Rachel Van Dyken and Violet Duke’s Resisting the Bad Boy, will love this super sweet and sexy romance from Anissa Garcia. 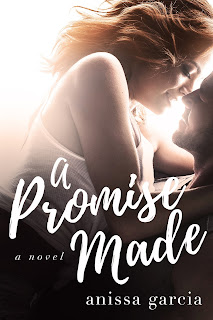 Title: A Promise Made
Author: Anissa Garcia
Genre: Contemporary Romance
Release Date: November 3, 2016
Publisher: AG Romance Reads LLC
Synopsis:
Josh McKenzie may come off as intimidating with his solid build and cold stare, but when trouble calls, Marla quickly learns there is more to the sexy tatted man with the British accent. And if she’s not careful, she can easily lose herself in his gentle touch and soft voice.

A feisty redhead with a mouth that won’t quit, Marla Sullivan knows how to push all of Josh’s buttons, making him want her in the worst way. His biggest hurdle is breaking through her stubborn walls and proving he’s here to stay.

When Marla’s faced with an unknown danger, Josh is forced to reveal his buried past. Promises made and surfaced truths may be the catalyst that brings them together...or pushes them further apart. 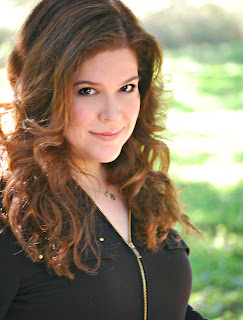 Anissa Garcia resides in Austin, Texas and earned her Bachelor’s Degree in Speech Communications and English. She held an array of jobs including Public Relations Manager for Barnes and Noble. Wanting a change of pace, she moved to Los Angeles where she attended The American Academy of Dramatic Arts, and trained full-time in theatre. After working in Hollywood, she returned to Texas where she has written articles for Cosmopolitan and Lady Couture. When not writing stories, watching movies, or drinking a latte, she loves to daydream about romantic fictional men.
Connect with Anissa at: Website | Facebook | Twitter| GoodReads | Instagram

Revolution by W.L. Goodwater My rating: 5 of 5 stars Revolution is the 2nd installment in the Cold War Magic series. It is a new installm...